The eyes are the windows of our soul.

You can found these in my bag:
Rayban Vintage Wayfarers from Japan

(I also have a pair of transparent ones for my hospital duties.)

The eyes are the windows of our soul. And I think also that the eyes are the most beautiful part of our bodies, so you must accentuate them. If there are accessories that I can’t leave home without, it must be spectacles. You’ll see why:

Wayfarers. I lost these alr :|

Wayfarers again. (with Marielle) Now I broke this one. To the thrift store!!! :)

Flywear Otsu. Channeling John Lennon. I think this will be my new prescriptions...

Even my sibs love specs! (and fedora hats)

I have found my new eyewear though. I really love painting my eyes.

/buhat bangko haha! I paint my eyes with Shiseido Maquillage gel liner, a gift I got for Christmas, thanks to the ever-so-fab Jen Aquino.

What part of your body is the most beautiful?

A nation by and for people.

I was just downloading the latest Grey’s Anatomy episode (go cringe at my pirating habits, I really don’t care /haha)  when I saw this:

I would not even pretend to be expert-ish on this because I don’t watch the news anymore. Nor read the broadsheets. I just heard about it, not that much though. I believe it was quite a ruckus when the 14th Congress failed to ratify the bill due to lack of attendance of our lawmakers (where did our taxes ever go).

According to the Philippine Constitution, section 7 of the Bill of Rights:

The right of the people to information on matters of public concernshall be recognized. Access to official records, and to documents,and papers pertaining to official acts, transactions, or decisions,as well as to government research data used as basis for policydevelopment, shall be afforded the citizen, subject to limitations asmay be provided by law.

It will be an essential law to use against corruption, economic empowerment, and social awareness and participation. The salience of the people can be heightened because information is accessible and readily available. The battle against corruption can be more successful than just giving names and not evidence. Economic players can, well, play much better. Again I am no expert, but isn’t it in class when handouts are given, it’s just easy to study and understand.

President Noynoy, however, promised that in the 15th Congress, this would be priority. But seems now, it isn’t. Well, at least he is not ashamed to inform the people of his Porsche. 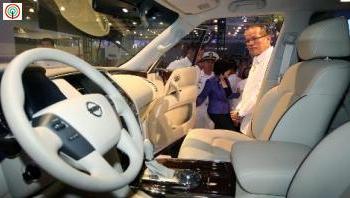 I don't know what to say.

People has the right to know. They elected people who they believe would lead them into a better Philippines. The people put them in their positions, ergo, it is just but appropriate to give the people a means to audit their actions, dealings, and businesses. The apathy that Filipinos have can actually be reversed to a responsible citizenship by educating himself, involving himself into the government.

We can give all the analogies to make it clear that this is indeed an urgent thing to attend to, if only people in power give a shit. Our own president can’t even stand up to his statements (i.e. certifying the FOI bill urgent). Mr. President-who-is-a-car-enthusiast, do you really speak for what its worth, or just for publicity’s sake? We hope not.

Today, Anonymous stands up for the right to know.

We are Anonymous, a leaderless movement that has worked tirelessly to oppose all forms of Internet censorship worldwide, from DMCA abuses to government mandated content filters. Our initiatives include supporting dissenting groups in Iran, Zimbabwe and Tunisia, as well as waging the highly visible information battle against the Church of Scientology. We are now prepared to take the fight to the world stage. Join us on January 15th for the first in a series of global protests in defense of WikiLeaks and freedom of expression. Stand with us to defend your freedoms.

Now there might be some extreme points Anonymous is trying to imply, but the purpose stays the same – we need to know. Besides, 66 countries exercise this right, why can’t we. The government owes us some story-telling.

Because a government that cares, informs and involves its constituents — right, honest, and transparent.

Read to be informed:

Oh! My Grey’s Anatomy download just got finished! Good thing too, the broadband cap was dumped. Lawmakers are finally making sense. I hope they do the same thing with the FOI Bill.